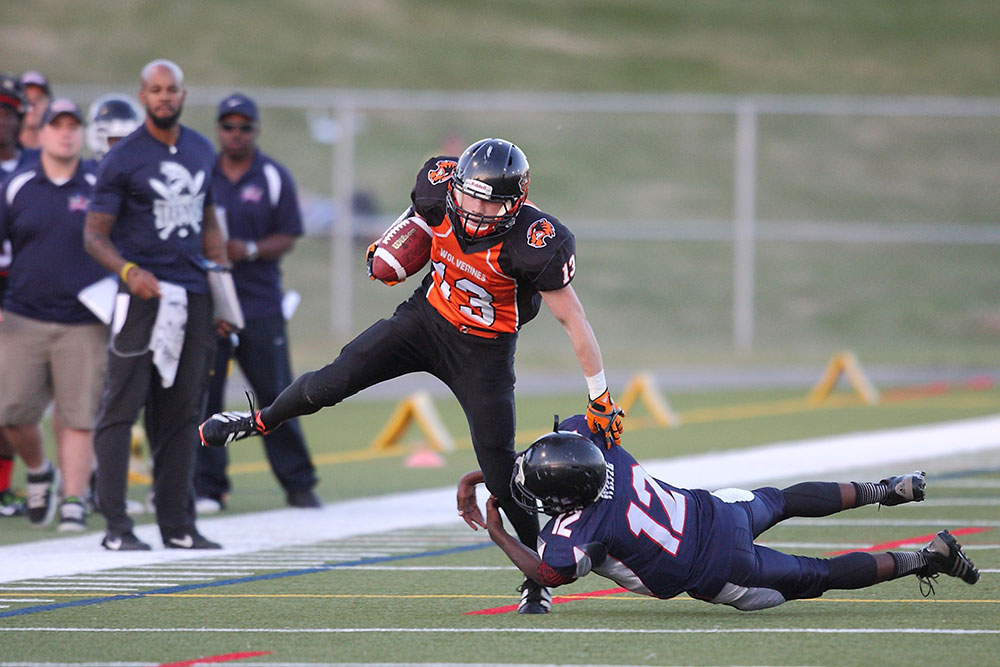 The Wolverines Bantam and Jr. Varsity football teams were involved in the first round of the OFC playoffs when they competed in their respective Ramsay Conference East semi-final games this past weekend. The Bantams travelled to Scarborough and were defeated 47-0. The Jr. Varsity squad travelled to Etobicoke and were able to easily upset the #2 Eagles 35-6 to gain the opportunity to play this weekend against the #1 Scarborough Thunder for the Ramsay East Championship and the winner will face the Dittmer Conference West Champions at the OFC Champ Day in Oshawa on August 3rd for the overall OFC Championship.

The Bantams faced the #1 and undefeated Thunder who are possibly the strongest Bantam team in the OFC. The lost to the Thunder brings the Wolverines season to an end. They have faced a very challenging schedule and were able to qualify for the playoffs with a 4th place finish in league play.
In speaking to Coach Vesnaver, he was basically pleased with the overall effort and development of his team and is looking forward to the 2020 OFC season.

The Wolverines Jr. Varsity team has been improving as the season progresses and now have won 4 in a row since their last lost and that was to the Scarborough Thunder in a tight 37-30 lost . The Wolverines were ready and played well against a strong Etobicoke team who had defeated the Wolverines in the first game of the season and with this playoff victory, the Wolverines are looking forward to this weekend and the Ramsay East Championship against the powerful and undefeated Thunder.

The Wolverines started out well with a long 80 yard punt return by Jamie Cooper for a TD in the early stages of the game. The defense played well and created several turnovers that enabled the offense to score two more TD’s to take a 21-0 lead at the half. The Wolverines continued their overall dominance and scored two more TD’s in the third quarter. The Eagles scored a late TD, but the Wolverines were able to close out the game with a great 35-6 victory. Scoring for the Wolverines with TD’s were Brett Bjorgan with 3 and singles by Jamie Cooper and Shaquan Coon. Hayden Mcilmoyle was successful on all 5 convert kicks.

Now the Wolverines (6-3) prepare for the Ramsay Conference Championship against the Scarborough Thunder (9-0) this weekend. The actual game details will be announced soon. Good luck Wolverines!

The other OFC Playoff match ups for this conference championship weekend are in the Ramsay Conference East , the Oshawa Bantams at Scarborough, the Wolverines Jr. Varsity at Scarborough and the Cornwall Sr. Varsity at Huronia. In the Dittmer Conference West, it is the Brantford Bantams at Sarnia, the Sault Ste. Marie Jr. Varsity at Chatham- Kent and the Sr. Varsity participants have yet to be determined due to a weather delayed game this past weekend. It will be Brantford vs. either Chatham-Kent or Waterloo after the makeup game is played ASAP.