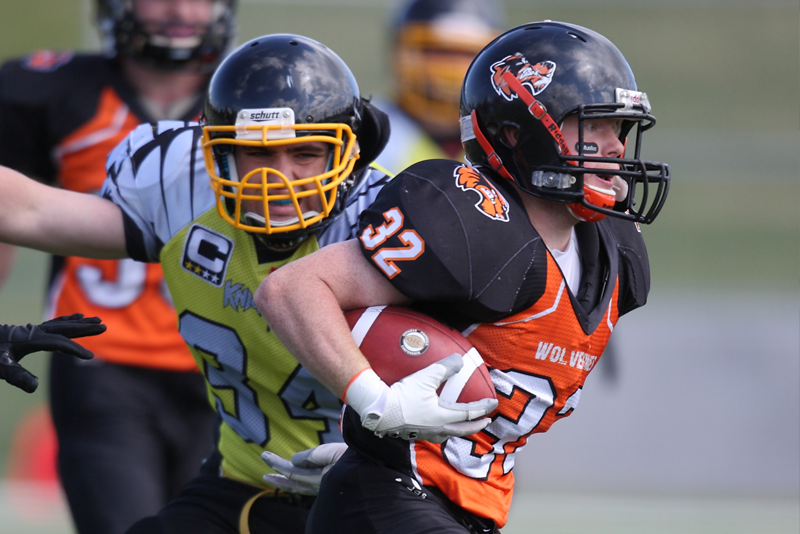 In the JV game, the Wolverines started slowly and trailed 6-0 after the first quarter, however, they came to life in the second quarter scoring four straight TD’s to take a 28-6 lead at the half. In the third quarter neither team was able to score and the Wolverines had to hold off a spirited comeback effort by the Bulldogs in the final quarter to escape with the Wolverines 35-30 victory. With this victory the Wolverines evened the season series at 1-1 with the Bulldogs and improved their record to 3-3 and have two games remaining in the regular season.

The Wolverines were lead in scoring by QB Brett Bjorgan who had another outstanding game in scoring 3 TD’s by rushing and passing a TD toss to Jamie Cooper. The other TD was scored by Daniel Corrigal and Hayden Mcilmore was successful on all 5 convert kicks.

The Wildcats came out fired up in the third quarter and outscored the Wolverines 10-0 to take a 17-14 lead into the final quarter. The Wolverines scored a go ahead TD late in the game to briefly regain the lead at 21-17, however, they couldn’t seal the victory when the Wildcats scored a TD off a fumble recovery and were able to hold on for their 24-21 victory. This was another tough loss for the Wolverines and their record is now 1-6 with two games remaining. Scoring for the Wolverines were Kyle Milburn with 3 TD’s and Trent Rowe recording 3 convert kicks.

This Saturday July 6, the Wolverines will host a triple header at the TAS Field with the Bantams facing Etobicoke at 11 am, the JV’s playing the Quinte Skyhawks at 2 pm and the SV’s closing out the day in a 5 pm contest with Skyhawks.