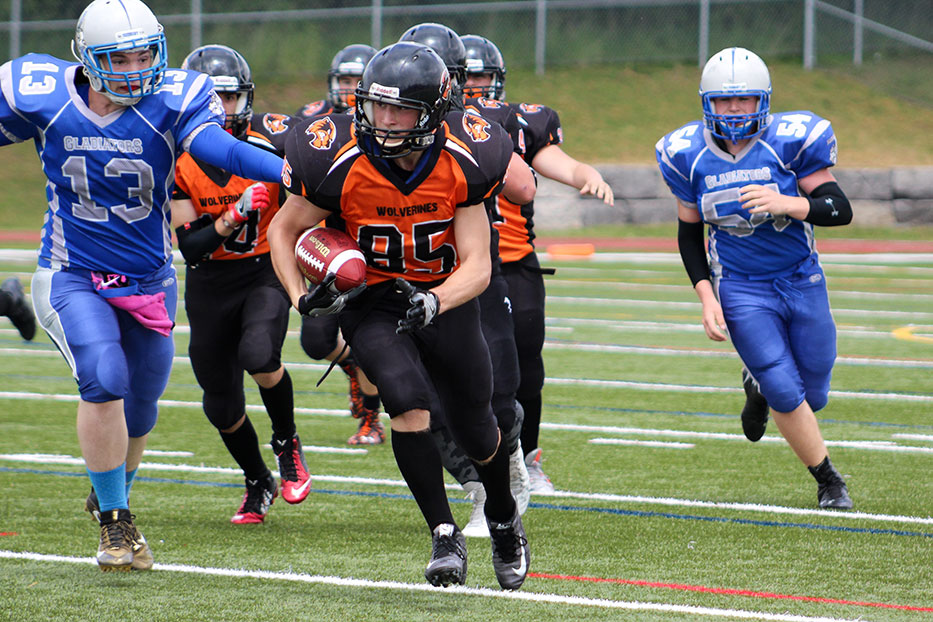 The Wolverines Bantams started the day by easily handling the Stallions 38-0. The Bantams are now 2-1 and will travel to Brampton on Saturday to face the Bulldogs in a 11:30 am contest. The Wolverines had great scoring balance with several players scoring TD’s. They were lead by Nate Thompson with two and single TD’s by Riley Keenan, Tristen Ross, Thomas Darling and Xavier Parmiter. Aiden Vesnaver was successful on two converts. The Wolverines Defense had a great day in posting the shutout.

The Jr. Varsity Wolverines followed with a hard fought victory over a good Stallions squad 37-22. The Wolverines will also travel to Brampton to face the Bulldogs in a 2 pm game on Saturday. The Wolverines had outstanding performances from several players on offence. QB Brett Bjorgan scored two TD’s , one on a 65 yard scramble and connected with passes to Carson Harvey for two TD’s, one was a 90 yard catch and run and the other of 54 yards. Daniel Corrigal scored a single TD and Hayden Mcilmoyle converted four Convert kicks and added a 22 yard field goal. This was a good win for the Wolverines and they look forward to facing the Bulldogs on Saturday.

The Wolverines Sr. Varsity squad faced a strong and determined Stallions team who with the 27-9 victory are now 3-0 and are leading the Ramsay Conference Varsity division. The Wolverines are now 0-2 and will travel to Cornwall on Saturday to face the Wildcats in a 4 pm contest. Both teams played on even terms throughout the first half with the Stallions scoring their second TD with 45 seconds left in the half to take a 14-7 lead at the half. The Stallions were able to outscore the Wolverines 13-2 in the second half to seal the 27 -9 victory. The only TD for the Wolverines was scored on a blocked punt recovered by Thomas Robinson in the enzone. The Wolverines played hard and look forward to gaining their first win against the Wildcats in Cornwall this Saturday.