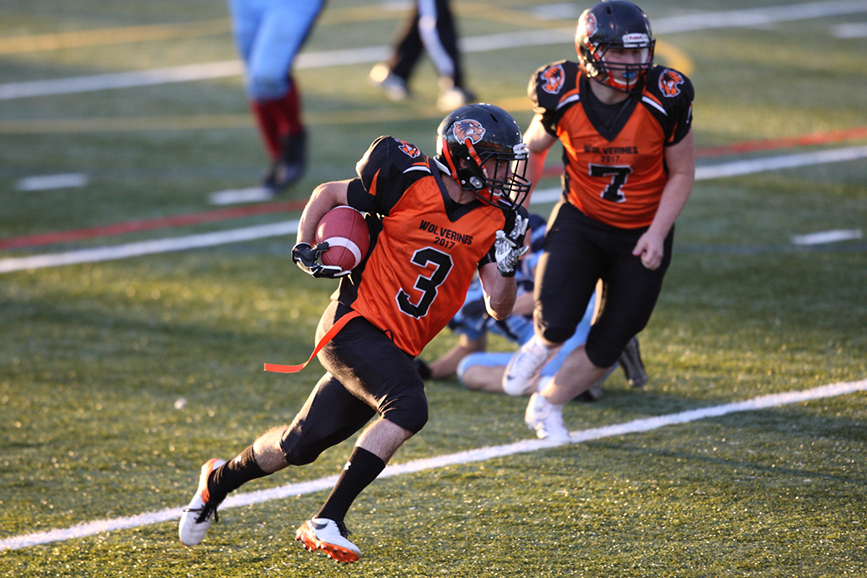 This past Saturday was a challenging and tough game day for the Peterborough Wolverines football teams. All three teams faced strong opponents and were defeated in all three contests. The Bantams lost in their first home game to the Scarborough Thunder 53-7. The Jr. and Sr. Varsity Wolverines opened their OFC seasons on the road when they travelled to Etobicoke to face the Eagles.
Both Wolverines teams were defeated with the Jr. Varsity falling 35-20 and the Sr. Varsity being shutout 17-0.

The Wolverines Bantams faced one of the strongest Bantam teams in the OFC and were defeated 53-7 by the Scarborough Thunder. The Thunder with their size and exceptional speed were able to handle the Wolverines and were able to take the opening kickoff and a in few plays scoring the first touchdown of the game. The Wolverines fought back and tied the game at the end of the first quarter 7-7 with a spectular pass play from Quarterback Lucas Brooks to Nate Thomson. Aiden Vesnaver was successful with the convert kick. The Thunder then took control of the game and with their offensive quickness and strong defense was able to dominate the game leading to the final 53-7 score. The Thunder improved to 2-0 and Wolverines are now 1-1.

The Wolverines Jr. Varsity team faced the Etobicoke Eagles squad losing 35-20 in a hard fought contest in Etobicoke. Scoring for the Wolverines were Carson Harvey with 3 touchdowns, one a long 70 yard run and Brett Bjorgan scoring a single touchdown. Hayden Mcilmoyle kicked two converts. The Sr. Varsity contest followed with the Wolverines who also faced a determined Eagles squad who shutout the Wolverines 17-0. The game was close with the Eagles leading 9-0 until late in the game when they added their final touchdown for the 17-0 final score. The Wolverines offense had a challenging day committing three pass interceptions, losing the ball on two fumbles and having untimely penalties which helped to stall their scoring attempts.

It was certainly a difficult weekend for the Wolverines, but now they have to get ready to host the Huronia Stallions from Barrie this Saturday in the fourth year of the “Cottage Cup Challenge”. The Stallions were able to capture the cup last year after the Wolverines claimed the cup in the first two years. The Wolverines are anxious and determined to bring the cup back to Peterborough this year!
The triple header will be played at the TASS Field with the Bantams game at 11 am, the Jr. Varsity at 2 pm and followed by the Sr. Varsity at 5 pm. The Cottage Cup winner is determined by the club winning the most of the three games and will be presented to the winning club at the conclusion of the final game.