Wolverines Enjoy a Day of Football 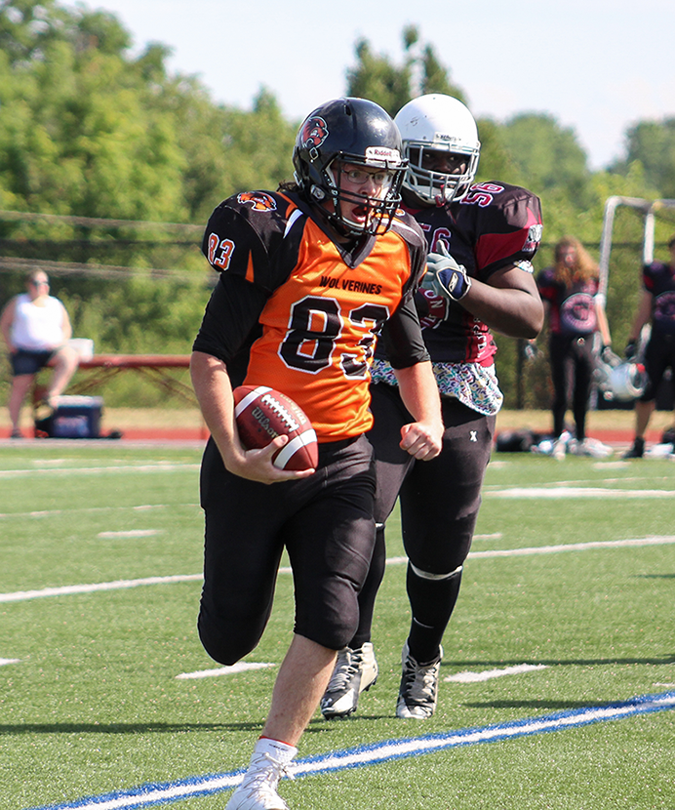 The Peterborough Wolverines “Rep” football teams enjoyed a pre-season day of football this past Saturday when they were able to host other opponents in a game like controlled scrimmage at the TASS Field. In all three contests no score was recorded or a time clock used. Both teams ran an agreed number of plays to see how their respective squads were progressing as they prepare for the start of their respective league seasons.

In the first contest the Wolverines Bantams were able to host the Niagara Spears who generally are one of the best football programs in the Niagara region. Both teams were able to see how they are progressing. The Wolverines Head Coach Christian Vesnaver stated that he was pleased, it was a good day and he is encouraged and optimistic about his young Wolverines as they look forward to opening their OFC season this coming Sunday May 19 when they will travel to Barrie to face the Huronia Stallions in a 1 pm game at the Barrie Sports Complex.

In the second contest of the day, the Wolverines Jr. Varsity squad was able to host the Quinte Skyhawks from Belleville and this too was a great opportunity for both teams to see how they are progressing. The Wolverines Head Coach Rick Thompson was also pleased with this opportunity.
He stated that the scrimmage went well and he is pleased with their progress at this point. He also realizes that they will need to improve in many areas as they get ready to start the OFC season. The Wolverines Jr. Varsity will actually have a Bye this weekend and will begin league play on Saturday May 25th when they travel to Etobicoke to face the Eagles in a 3 pm game at Centennial Stadium.

In the final contest of the day, the Quinte Sr. Varsity team was unable to attend due to recent set back with injuries and they notified the Wolverines early in the week apologizing for not being able to participate at this time. The Wolverines under stood the situation and simply arranged to participate in a inter-squad Orange/Black scrimmage.

The Wolverines Offensive Coordinator Brian Buckingham, who was representing Head Coach Ken Butcher who was away and unable to attend, said he was pleased that they were able to get the scrimmage in and was basically pleased with the overall effort by all players. He thought the offense had a big challenge facing the Wolverines defense which may be one of the strongest defensive units in the OFC this season. The coaches all agree that they need to work in many areas as they prepare to open the OFC season. They will join the Jr. Varsity Wolverines as they too will travel to Etobicoke on Saturday May 25th to face the Eagles in a 5:30 pm game.

It was a great day for all teams and they look forward to their upcoming OFC season openers!